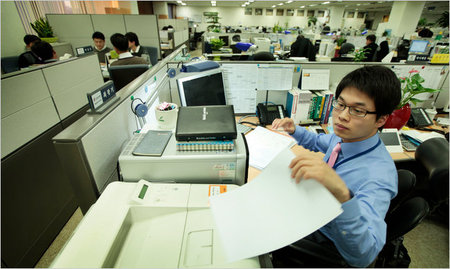 A gigabit per second, that’s the future of home internet in South Korea

South Korea, which already claims the world’s fastest Internet connections globally, is looking to boost it even more. Choi Gwang-gi is overseeing South Korea’s plan to connect every home in the country to the Internet at one gigabit per second by the end of next year, a tenfold increase from the current standard and 200 times faster than the average household in the United States. A pilot gigabit project is already underway by the government, with 5,000 households in five South Korean cities wired. Each customer pays about 30,000 won a month, or less than $27. While Americans are still far behind, at No. 2 is Hong Kong and No. 3 Japan, according to the Internet analyst Akamai Technologies. The South Korean project is also meant to increase wireless broadband services tenfold.

Choi, an internet visionary says the country needs to be prepared for things like 3-D TV, Internet protocol TV, high-definition multimedia, gaming and videoconferencing, ultra-high-definition TV, cloud computing, even though some of them are still under development by engineers in Seoul, Tokyo and San Jose, Calif. Currently Hong Kong and Japan offer gigabit service. Australia plans to launch it in 2018. Google is working on pilot programs for part of the Stanford campus in the US. And Chattanooga, Tenn., has started a citywide gigabit service, reportedly at a staggering $350 a month. South Koreans pay an average of $38 a month for connections of 100 megabits a second, while Americans pay an average of $46 for service that is molasses by comparison. At a gigabit per second; gaming, streaming Internet TV, video and music downloads or even video chats will be possible at a snap or touch of a finger. Truly revolutionary.
[NewYorkTimes]