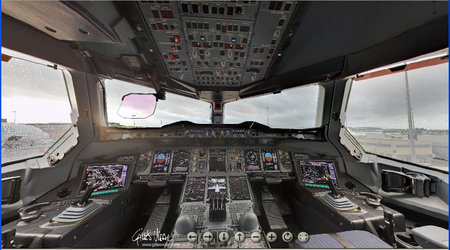 3D View of the Airbus A380 Cockpit

The Airbus A380 is the next big thing to happen to air travel since the Boeing 747 Jumbo. During the course of the year and 2009 we should be getting more and more of the super Jumbo. Ever wonder how does the flight deck of this mammoth look like, check it out in its full 3D glory.
The A380 features an improved glass cockpit, and fly-by-wire flight controls linked to side-sticks.[39] The improved cockpit displays feature eight 15-by-20 cm (6-by-8-inch) liquid crystal displays, all of which are physically identical and interchangeable. These comprise two Primary Flight Displays, two navigation displays, one engine parameter display, one system display and two Multi-Function Displays. These MFDs are new with the A380, and provide an easy-to-use interface to the flight management system—replacing three multifunction control and display units. They include QWERTY keyboards and trackballs, interfacing with a graphical “point-and-click” display navigation system
Source