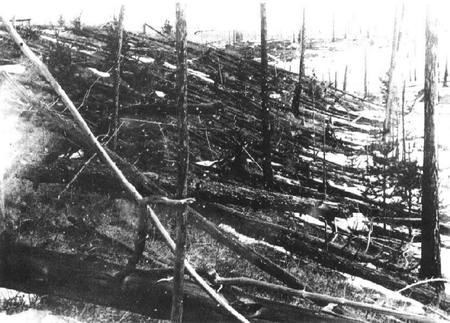 Russian news agency Interfax is reporting that thieves have stolen a three-tonne meteorite from the yard of the Tunguska Space Event foundation, whose director said it was the part of meteor that caused a massive explosion in Siberia in 1908. The massive three tonne rock was bought to Krasnoyarsk after an 2004 expedition to the site of the so-called “Tunguska event” – a mysterious mid air explosion over Siberia in 1908 was 1,000 times more powerful than the nuclear bomb dropped on Hiroshima in 1945 and felled an estimated 80 million trees over 2,150 square kilometers (830 sq mi). The foundation’s director Yury Lavbin claimed to have discovered the wreckage of an alien spacecraft during the expedition.

“It winds up that it disappeared said Lavbin. “Our colleagues are establishing what got lost, where the rock is and why they only came to us about it now,” he said.
Via – Interfax