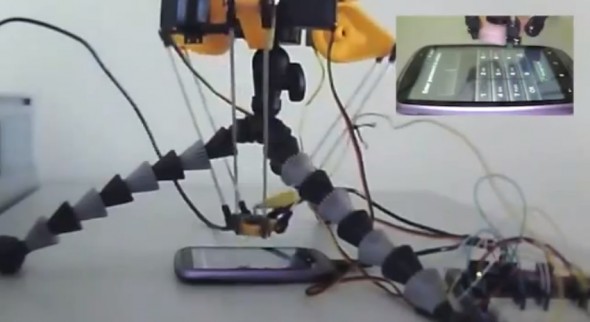 With Def Con fast approaching, we are readying ourselves for some kick-ass action from the underground hacker’s conclave. And just a few days before its start, we have got a taste of what’s coming our way. Two die hard ‘Star Wars’ fans (more on that later) have come up with a cheap bot that can hack any Android device’s lockscreen password. No hack exactly, but tirelessly punches all probable combinations to find its way in. Justin Engler and Paul Vines, the duo behind the bot, have named it R2B2 (yes, after the iconic bot from Star Wars). It took them just $200 in parts as most of the components are 3D printed and uses open source software to run.


R2B2 can only work on numeric locks and can’t get past patterns. The stylus taps on the screen punching all the 10000 possible combinations and takes under 20 hours to complete the task. The duo is also trying to use it for hacking into ATM and Hotel lock codes. In addition to it, they are trying to make another version of the bot by replacing the stylus with electrodes which will bring down the time it takes to hack the combination. They have decided to name it C3BO (Okay, we saw that coming!). Check out the video of the bot having a go at an Android device.