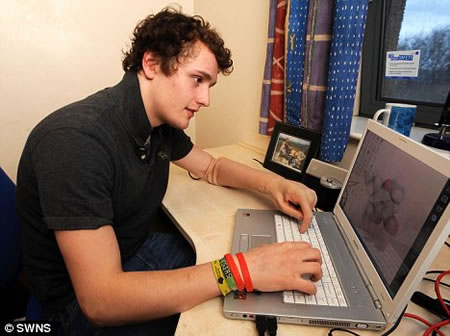 A student who lost his hand in a horrific car accident told yesterday how a Scottish technology company had allowed him to resume doing the “hundreds of everyday things” he once took for granted. Reynolds lost his left hand when the car he was in scraped a post in 2006.He had been resting it on the vehicle’s wound-down window ledge when it hit a wooden stake at the exit of a car park and his hand was amputated. The i-Limb features its own individual motors allowing a much more sensitive grip than previous prosthetics, which were limited to a claw-like action, control each finger of the i-LIMB. It is fitted to the stump with a socket that contains the rechargeable battery and sensors that detect myoelectric currents in the muscles that would have controlled the hand. His injury had not stopped him playing sport but he took the prosthetic off before he took part in rugby or squash and would not be wearing it for a planned skydive. The bionic hand took 20 years to develop and has five separately working fingers.

The Scottish company Touch Bionics developed the £10,000 / $14,000 i-LIMB and Reynolds is only the second Briton to be fitted with one. Unlike previous prosthetics, the hand can tell how tightly it is gripping, allowing the user a large degree of control. The i-LIMB was introduced in 2007 and has won awards for its innovative technology. About 450 people, most in America, have been fitted with the prosthetic hand so far.