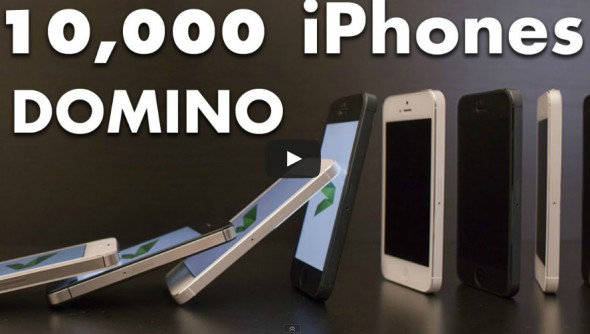 10,000 iPhone 5s in a domino cascade simulation makes us wonder what it would really be like

It’s astonishing what volume can do. It sure as ever can blow a simple idea into a much larger perspective. Take for instance the 10,000 iPhone 5 Domino Cascade done by Aatma Studio. Acquiring 10,000 handsets is one thing. And then having them sequentially fall prey to gravity is another altogether. Substituting these virtual handsets with real ones would cost more than an arm and a leg. As per last calculations, it could amount to a whopping $5 million. May be it would be better saving the real effort and feasting our eyes on this computer graphic simulation that is just as stunning.


Aatma Studio have done their bit in the past to make us believe their credentials of thinking out of the box. They especially favor iDevices. Their former iOS concept video did go fairly viral with the connectivity of the iPad 3 bought into perspective.